What follows is a report I wrote almost immediately after my first ever 6-hour Psilocybe cubensis (Brazilian type) trip. The description slips into the mystical, but believe me, the rational language doesn’t do justice to the experience.

All in all, I think we should try to map the psychedelic experience. There’s a bank of almost 2000 mushroom reports on Erowid website but we need to categorize them and do more research in general. Benny Shannon did something like this with Ayahuasca in The Antipodes of The Mind.

Most Comprehensive Reference on the Subject 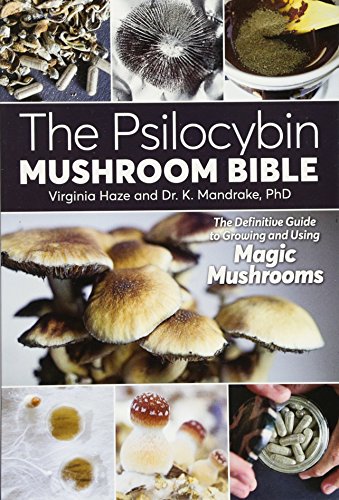 The Psilocybin Mushroom Bible: The Definitive Guide to Growing and Using Magic Mushrooms
$21.99

Contains a 40-step photographic instruction on the whole process of magic mushroom farming and its correct and safe use.

Buy Now
If you click and buy something, I will earn a commission at zero extra cost to you. Thanks for support!

Note: This took place in my room while lying in bed with closed eyes. I ate the mushrooms on an empty stomach. 5 Grams is known as the “heroic dose” so please don’t try this at home or consult your doctor beforehand.

This was beyond words. Beyond everything, I’ve ever experienced in my life. At the onset, maybe 20 minutes after I ingested the mushrooms I already felt some change in my perceptual field. I put on the sleep mask and tried to remain steady. But I was not ready for this – not in the least.

I was meditating for one hour before eating the mushrooms and I tried to remain in this meditative state. But it became stranger and stranger and I’m really happy I had a sitter who was taking care of me. I’m eternally grateful for her presence because otherwise, I would have lost it. The touch of the human hand kept one side of me in this world. Without it, I would have given in to fear.

It was another world. The perceptual changes were just astounding. It felt as if I left this dimension and was in some strange realm beyond my body. It was so powerful I was agape and laughed and cried at the same time. And I couldn’t dictate any terms at all. I was possessed by this force and it showed me what it wanted to show me. I felt really strong vibrations throughout my whole body.

It was beyond time, beyond space, and beyond the usual perception. I couldn’t tell how many hours or years, or thousands of years had passed.

Losing the perception of time and space

Going to the bathroom was a grand expedition and it seemed to last for eons. I was so lost I couldn’t tell where I was – but I was not stunned – I retained my conscious awareness but it didn’t seem to be preoccupied with space as we usually experience it.

After coming back to my room I was “lifted” outside my body, and operated solely in this “consciousness realm” without the usual human limitations of sensual perception, time or space. I saw the grand statue that was somehow losing its footing. It was suspended in space and the lower part of it resembled an inverted obelisk. The top looked a little bit like a bust of a Roman emperor but below it was surrounded by glistening lights and somehow spiraling motifs. It was vertical and vibrating and it held great meaning for me.

The Temple of The Goddess

In fact, the female presence was pervasive in that world. Even thinking about ego and masculinity was somehow forbidden as it was the realm of the Sacred Goddess of Nature. (Note: After doing research during the same day, I found a striking similarity between the vision of the steps and the steps that lead to the newly discovered Gunung Padang megalithic site – I never heard about this site before my trip). Before ingesting the hallucinogens, I imagined I would see fairy castles and beautiful art motifs. It was none of that. It was mostly gloomy but beautiful at the same time. It was deeply feminine and felt like an encounter with a spirit of nature. It was like a jungle. It was full of liquid and it was flowing – constantly flowing like the blood cells in the arteries.

But it had this green texture to it, like some deep jungle cavern. There was a lot of water and snakes, frogs and squirmy things thrashing about. But it was mostly dark, strange place. It was inside of somewhere – like somewhere underground.

The Inappropriateness of the Human Language

I read that the mushroom likes to use verbal language to endow humans with secret knowledge. But during my mushroom experience, I heard absolutely nothing. I said “Reveal yourself!” but then it hit me with such astounding visuals that literally took my breath away.

But it remained mute in terms of spoken language. I communicated with symbols, feelings, metaphors and majestic things. It didn’t know the human language but in a way, it was language.

In these flowing textures and colors, I could almost see hints of a language. At one point it was like an octopus (I actually saw an octopus) – beaming with colors and vibrational fields. I had a feeling that it was far too advanced for me to understand it. The Encounter With The Aliens

I still haven’t touched upon the major thing that soaked through the greater part of the experience. It was The Alien. And I didn’t expect to see aliens but there they were – very unapologetic. They looked like the stereotypical Aliens. They had large, wide eyes and bore a human-like form. Big heads, grey skin, you know the story. But they were there! Dozens of them! Looking at me!

And during the trip, I felt like the grand interstellar drama of the Aliens was unfolding. I saw huge amounts of entities behind thick glass, looking at me, squirming in great fear of an oncoming doom.

It was as if I was the witness. I was endowed with the knowledge of what happened to the Aliens and I was to tell their story to other humans. There were multitudes of them; all in a tight space and the rest of the landscape was abound with skulls in an aftermath of a grand disaster.

The Father of The Aliens

After seeing these disturbing images, I made peace with the Alien and it was like a grand symbolic gesture: I understand what happened to them and will carry this memory forward (that was the feeling I had). I somehow met the “Father” of the Aliens, grasped his hand and he slightly smiled at me (there were smaller entities behind him which remained impassive). Unlike The Goddess, he was Masculine. I should also note that all communication between “us” felt like it was telepathic. The message was just “transferred” into my mind.

But during the trip, it really felt like there might have been a civilization on Mars, but it was entirely wiped out by a huge cataclysm. And there are remnants of this civilization in the minds of humans.

Other than this cosmic grand scheme, I also felt boundless love towards all humanity. My girlfriend appeared to me as a deity and I felt how our destinies are intertwined. I also felt that I was a partner towards her on the surface, but not with my whole being. That moment was deeply touching because for the first time I felt this state of Union with her and others. Beyond that, I felt like the opposites were coming into a whole and every time this happened, there was a feeling of profound peace. It felt like the parts of my personality were coming together to create a more integrated whole. But there was also something that didn’t come together. It was like good and evil or Yin and Yang. The two parts floated amongst each other but didn’t touch.

When I finally opened my eyes after many eternities, I felt strange in my human form. When I looked at my body, I thought – “Ah, so this is the body that I inhabit now”. My limbs seemed very inadequate and my whole body image felt very monkey-like. It felt like I was coming down from a higher realm, and then taking residence in this body.

But the mushroom didn’t answer my pressing questions. I guess I’ll have to wait for that. It had its own message and in many ways it was profound.

Now I would like to know what you think and if you had a similar experience with the mushrooms. Don’t hesitate to share your story in the comments section below.