Your essay needs to be coherent and written in a way where one idea flows naturally to the other.

But how to make sure that everything is tied together, and that you present your arguments in a logical, smooth manner?

It’s simple. You do it by using transition words and phrases, which can turn your scattered thoughts into a well-organized, and neatly looking piece of prose.

“Look on every exit as being an entrance somewhere else.” – Tom Stoppard


It is common knowledge that the ability to write a great essay is tremendously helpful to those who are pursuing higher education. According to the Princeton Review website, other than having a sterling academic record and getting a high score in standardized tests like the SAT and the ACT, submitting a well-crafted essay can help set you apart from other talented applicants.

In fact, even if you like to climb a rung higher on the academic ladder, like getting a master’s degree, for instance, you also need to write essays when you take the GRE. The same goes for taking the LSAT to enter law school, or the MCAT to get into a med school. So, it wouldn’t hurt to add all the weapons you can find to your essay-writing arsenal, like these transition words.

What are transition words?

Transition words and phrases are a part of speech, and they’re used to create coherent relationships between ideas in the text. The ones you might be familiar with are ‘and’, ‘but’, ‘so’ and ‘because’. They’re applied to maintain a logical, uninterrupted stream of thought and smooth flow of paragraphs and sentences.  and their goal is to show your reader the relationship between phrases, sentences, or even paragraphs. When you use them, you make it easier for your readers to understand how your thoughts and ideas are connected. There are around 200 of them in the English language.

Example: Regular exercise leads to improved cardiovascular performance. Additionally, it improves the function of the brain.

Here are the main rules of usage of transitional words: Your regular essay will comprise five paragraphs – an introduction, three paragraphs to present your points, and a conclusion. Your job is to make the prose consistent and that’s why you need words and phrases to create links between the ideas. To achieve that, you can use a free app like Grammarly to clean up your prose, which also comes in handy if you plan to earn with freelance writing projects.

The words and phrases below are mostly used in persuasive (argumentative) essays where you need to convince the readers of your opinion in a confident manner. But in fact, they’re useful in almost any type of writing (such as expository essays) simply to keep the structure intact.

If you use them well, they can emphasize contrast, highlight a similarity, and solidify your conclusion.

Transition, a formal definition: the process of changing from one situation, form, or state to another.

Transition words are used at the beginning of each new paragraph.

They can also be used when you present a new point in the same paragraph.

In fact, there’s a multitude of transition words that will contribute to a more harmonious essay

Many students make the mistake of repeating the same words over and over again. This, in turn, causes them to lose impact and meaning. Among grammarians, this phenomenon is called grammar saturation.  The important thing to know is that there are several categories to transition words depending on the type of impact you’d like to create in your writing. Often, there are several words suitable for one transition, just remember that they don’t always mean the same and you might need some practice to recognize the subtle differences between them.

To avoid this, look up synonyms, and never use the same transition word more than once in a single piece of prose (especially in the same paragraph).

If you need a more in-depth course on this topic, you may read A Writer’s Guide To Transitional Words and Expressions. 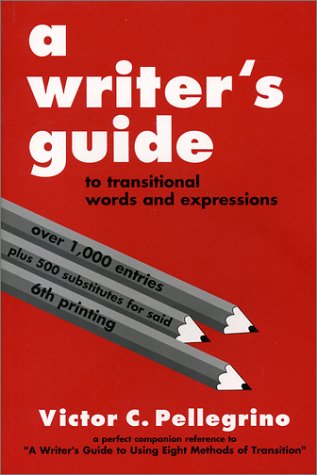 A Writer's Guide to Transitional Words and Expressions
$15.18
Buy now on Amazon

Here’s a list of transition words that’ll come to your rescue:

When you want to indicate similarity or addition:

When you want to indicate dissimilarity, contrast or contradiction:

When you want to indicate similarity:

When you want to indicate cause, effect, purpose, consequence, or result:

When you want to put emphasis on something:

When you want to indicate time or sequence of events:

When you want to indicate spatial order or reference: How these words relate to the format of your essay?

If you focus on academic writing you’ll need to adhere to a specific essay format. Use the following words to create comprehensive transitions between paragraphs:

These ones come in handy when you craft your first supporting paragraph (the one after the introductory one). Here you usually start building on your thesis and start giving arguments in its favour.

Words to use in an introductory paragraph:

Connecting the second paragraph to the third:

Connecting the third paragraph to the fourth:

Connecting the body to the conclusion:

“The best part of your story is when it changes.” – Bella Bloom

Bonus material – a printable PDF chart with link-words (always keep it beside you):

In this short video from 7ESL you can get some additional ideas on how to link your ideas together with different words and phrases:

Now it’s your turn to write a well-structured essay

Starting an essay is always challenging even for advanced writers. Hopefully, by reading this article I made your task just a little bit easier by adding a valuable tool to your writer’s toolbox.

Just remember to use these phrases in an original way, and without repetition. The last thing you want to do is to sound mechanical as if you’re writing from a template. 5 Ideas On Becoming A Spiritual Atheist 5 thoughts on “45 Best Transition Words and Phrases For Essays”