Active imagination is a mental practice formally developed by the Swiss psychologist Carl Jung between 1913 and 1916. However, even before the advent of Jungian psychology, this technique was present among many tribes and peoples over hundreds of years.

Avicenna and the Sufis took it as a gateway to the realm of the divine. It’s a cousin to Blake’s Divine Imagination and the Aboriginal Dreamtime. But what is it exactly? And can it have therapeutic capabilities?

The beginnings of active imagination in psychology

At the beginning of the XX century, Jung wrote his seminal work titled “Active Imagination”. Many of his followers made it more accessible to the general public. Among them was Robert A. Johnson who wrote “Inner Work: Using Dreams and Active Imagination for Personal Growth”. I highly recommend it if you want to learn more about the subject. 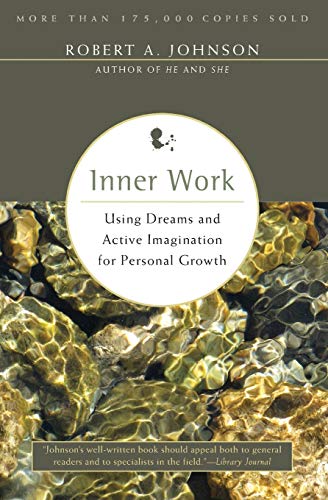 Learn how to utilize dreams and imagination for personal growth Offer mind exercises for achieving wholeness and satisfaction.

Buy Now
If you click and buy something, I will earn a commission at zero extra cost to you. Thanks for support!

What is active imagination?

It’s a mental technique you can use to get in touch with your subconscious mind by actively engaging with the contents of your imagination.

Observing the images and symbols in your mind’s eye allows you to interpret them, draw meaning from them and transform them into insights you can use in your daily life. In that way, the technique is similar to dream interpretation.

Often, there is a conflict or confusion in the psyche. You feel sad or worried but you don’t know what causes these feelings. The job of active imagination is to connect you to your deeper self and reveal your innermost feelings and desires. When you see them clearly, it’s easier to act on them or resolve them.

Please note that there is a difference between a passive fantasy and active imagination. From Inner Work:

Passive fantasy also presents images from the unconscious. But since we can’t consciously enter into it, it is mostly a waste of time and energy. The issues or problems that come up in the fantasy don’t get resolved. Most such fantasies just repeat themselves over and over again on the edges of our minds until they exhaust themselves or exhaust us. There is no evolution, because the ego never confronts the fantasy situation or enters into it as a conscious, independent force.

I wouldn’t exactly say that passive fantasy is a waste of time and energy, but in the context of active imagination, it can be viewed as such. During your session, you must actively participate and retain the notion of “I” – “I do it, I go there” – it’s not just observation. How to practice active imagination?

According to Robert A. Johnson, there are four steps to active imagination.

The first thing you need to do is to “invoke” the unconscious in order to communicate with it.

How to start your session?

You can start by lying on your back in a comfortable position and making sure you won’t be disturbed (if you feel it would help, play some deep ambient background music). Take a few deep breaths to relax even more and then start asking:

Where is the obsession? Who is obsessed? Where does this feeling come from? Who is the one inside me who feels this way? What is its image? What does he or she look like?

After some time, the images should start to appear in your mind’s eye. It doesn’t always work and depends on your personality so you may need a few sessions to achieve the desired effect.

2. Dialogue with the experience

Now it’s time to take the normally impalpable content of the unconscious and bring it to the surface in an image (symbolic) form, so you can dialogue with it. There is a delicate balance between the ego and your inner self:

Carl Jung thought that the best way to practice is to avoid exerting influence on the images from the unconscious mind. It’s better to look at them with conscious awareness and notice any changes that may appear. Again, it’s important not to fall into passive fantasy.

In the words of Jung:

The intent should not be to control the image but to observe the changes that will arise from spontaneous associations. You yourself must enter into the process with your personal reactions…as if the drama being enacted before your eyes were real. No matter what happens during your imaginative session, it’s important that you don’t lose your sense of morality. The images in your mind are real and as we noted before, they change things in the psyche.

This puts a certain obligation on you:

4. Instill the lessons from active imagination with a physical ritual

It’s possible to find true insights and magnificent images during your session. But what are you going to do about them? If you just go on living your life, the lessons will be soon forgotten.

Write it down and interpret the symbols

First of all, you should write down what you saw and try to interpret it. You will think of different possibilities and suddenly something will “click” in your psyche and you’ll know it’s the right answer.

Perhaps you will notice that the images you saw symbolize a neglected part of your personality. Maybe there’s a free soul in you, but all this time you were overly serious. Maybe you noticed a strong need for improvisation, but recently you were so rigid. Maybe you want to build deeper connections with others but you were cold and calculating.

Whatever it may be, you have to identify the message. Acknowledge the insights from active imagination by performing a physical ritual

Now it’s important to “seal” your newly found knowledge with some kind of physical ritual (the same goes for dream interpretation). Again, from Inner Work:

The highest form of ritual has this characteristic: Those who participate sense that they are doing an act that has symbolic meaning, and they consciously seek to transform that act into an active, dynamic symbol. Their every movement becomes a symbol-in-motion that carries the power of the inner world into visible and physical form.

This physical ritual is a symbolic expression of the insight you’ve gained during your active imagination session. If you felt a deep connection with nature, you might go deep into the natural environment and symbolically touch an old tree. If you felt a need for vigor and movement, you may want to recognize it with a spiritual dance. If you met a creative part of yourself, you might want to create a small sculpture.

By doing this, you say to your deepest self – “I understand you”. This will not only fill you with a sense of reverence but also resolve some of the conflicts lurking deep inside the psyche. Using Jungian terminology we could say that the opposites will come together to create a more integrated whole.

Johnson was right – in our secular world we need more sense of reverence:

All my experience as a psychologist leads me to the conclusion that a sense of reverence is necessary for psychological health. If a person has no sense of reverence, no feeling that there is anyone or anything that inspires awe , it generally indicates an ego inflation that cuts the conscious personality off completely from the nourishing springs of the unconscious. It is ironic, then, that so much of our modern culture is aimed at eradicating all reverence, and respect for the high truth and qualities that inspire a feeling of awe and worship in the human. My own experience with active imagination

Last night I did a twenty-minute session of active imagination. I found it helpful to do it while listening to relaxing, ambient music. I was lying on my bed with my eyes closed. After a few minutes, a noticed a change in my inner perception. There was no longer just the warm brown color of the closed eye-lids. Rather, some seemingly random images started to appear.

Following the technique, I tried to engage in dialogue with the images and somehow personify them. I asked – “Who is this?” And suddenly, a short, old man appeared. He was dressed in green robes and was very old. There was something Chinese about him and in a way, he was a mixture of Yoda and Confucius.

But after a while, his face was hidden under a hood, and I couldn’t see his eyes anymore. He was a personification of a mystery, and I couldn’t get any answers from him. I asked – “What should I do?” And I received some trite piece of advice such as “follow your path.”

I asked again but then I understood that I probably won’t get a verbal response. Just as during my experience with magic mushrooms, I received the message in a form of images and symbols.

After coming to grips with that, I stopped trying to control the experience and let my imagination free. These images were beautiful but didn’t hold such meaning as “The Green Man”. It meant that active engagement is essential to the technique but doesn’t always work. It requires practice, repetition and a little bit of luck.

In the end, I once more tried to ask questions but what appeared in my mind was Glossolalia. Once again, I took it as a symbol of the inadequacy of the human language and came to the conclusion that it’s about the image itself.

It represented a profound sense of mystery.

I fell to thinking of this most
courteous lady, thinking of whom I was overtaken by
a pleasant slumber, wherein a marvelous vision was
presented to me…”